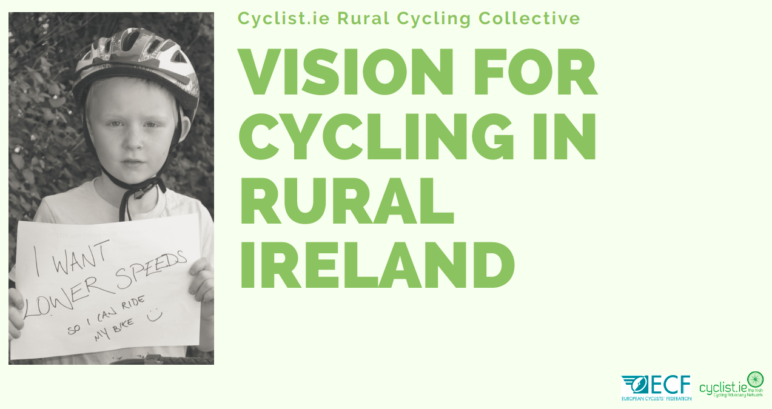 The vision document was launched by Minister of State, Malcom Noonan on the 23rd of September, 2020.  Representing Kerry Cycling Campaign, Anluan Dunne was a member of the launch panel and spoke at the event

The vision document provides the information and guidance to enable Kerry, and other counties, to excel in a multitude of areas.

We understand that some of the changes needed to enable a higher quality cycling experience are at times not visible. This is especially the case if one does not cycle regularly.
– We encourage you to get on your bike and experience your local area and identify where you believe improvements are needed

We also understand the concerns of business leaders when we talk about re-prioritising road space for people walking or on bikes. As a country we have forgotten the value of those who travel by foot or bike. A value which is economically four times greater than a customer arriving by car and far more loyal to local business over out-of-town retail parks.
– We have engaged with Chambers Ireland and the local chambers in Kerry

What we wish for is an enhanced sense of community, safer streets for people of all ages and abilities and a thriving and growing population which can support our local businesses.
– We are engaged with sports clubs, community organisations and the PPN

We want to drive Kerry forward with with a sustainable approach to the treatment of our communities, towns and villages, with new tourism offerings with proven returns and a real and tangible contribution to business.
– The funding is available from national government, now is the time to seize this opportunity and make the changes needed. Contact your local politicians today and tell them that you want to see cycling prioritised

The vision is available from the cyclist.ie rural vision webpage (PDF). 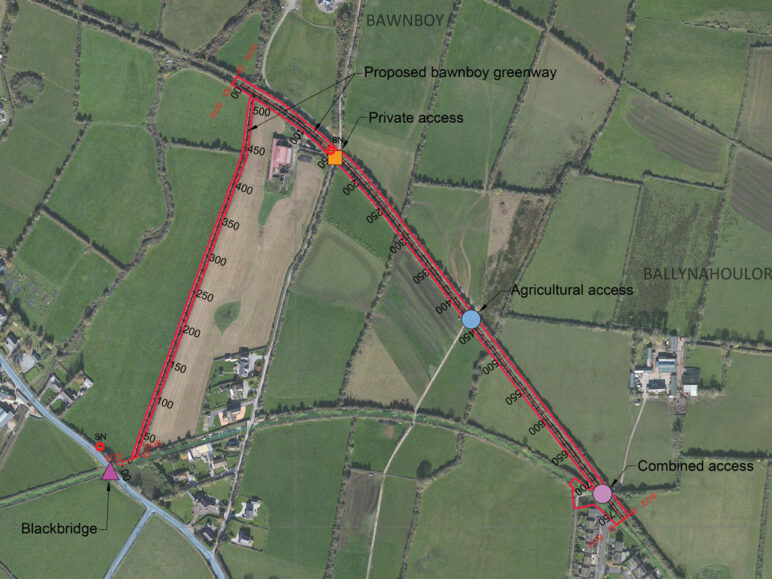 Kerry Cycling Campaign calls on Tralee M.D. County Councillors to refuse to grant the Part 8 planning for the proposed diversion at Bawnboy, Tralee.

The Part 8 as drafted represents a failure to adequately mediate with the business which is occupying a section of the line at Bawnboy, Tralee. In addition, it bypasses significant historic railway features associated with the 133 year old line.

Keith Phelan, speaking on behalf of Kerry Cycling Campaign said: “This proposed Greenway has the potential to open up North Kerry to increased tourism levels, to encourage greater levels of walking and cycling locally in the immediate Tralee to Fenit corridor. The proposed diversion and flies in the face of the decision made by Kerry County Council to unanimously approve the original Part 8 proposal, as stated in both the EIA and AA statements and described as – ‘the previously approved and assessed Tralee to Fenit greenway’”

The proposed diversion deviates unacceptably from the original railway line path, which is in public ownership, undermines the 133 year old line and removes a potentially iconic feature from the Greenway.

To now discover that Kerry County Council propose to introduce a major diversion to the originally agreed route, subsequently ratified via the original Part 8 process, is more than disappointing.

Anluan Dunne, speaking on behalf of the campaign said: “the diversion will add nearly a kilometer the length of the greenway with no obvious benefit or practical reason and inconveniences those who could use the route to commute. School children from areas close to the greenway will be put off using the greenway to cycle to school as the length of their journey will potentially increase”

Kerry Cycling Campaign, on behalf of greenway users, pedestrians and cyclists from across County Kerry, objects in the strongest possible terms to this Bawnboy amended greenway route.

Anluan Dunne concluded: “All parties must re-engage in meaningful, transparent and constructive discussions to create a solution that satisfies the needs of all involved. It is also critical that our public representatives engage in this process to ensure it is successful. Should it not be possible to come to an agreement in the near term, the Bawnboy diversion should be seen as temporary”

The deadline for submissions to the Part 8 planning process is 5 PM on Friday the 4th of September. The Kerry Cycling Campaign urge the people of Kerry and beyond to voice their opinion and make a submission to ciu@kerrycoco.ie

Kerry Cycling Campaign is a voluntary membership group who wants a cycling-friendly Kerry for people of all ages and abilities. We are a member of Cyclist.ie, the Irish Cycling Advocacy Network.