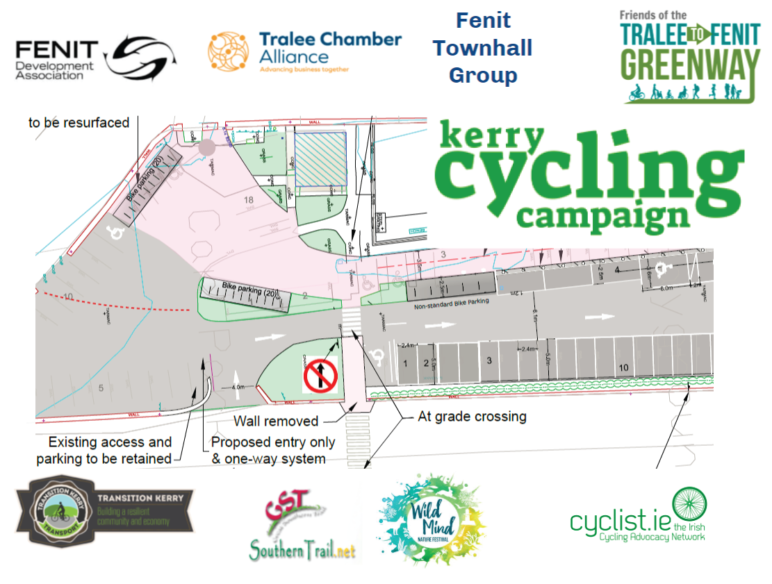 The Kerry Cycling Campaign welcomes and supports the proposed new greenway trailhead, traffic calming measures as well as bike parking and amenity areas as part of the Tralee-Fenit Greenway.

As part of the public consultation process managed by Kerry County Council, the group made some constructive and positive suggestions to improve on the design. Key to the proposed changes was a reconfigured design of the Fenit Trailhead for the Greenway which aims to provide a prominent public space which could become a focal point for the village without affecting the budget.

Following the submission, the group wrote to all Tralee M.D. Councillors and the two Tralee TDs seeking their support.

Speaking on behalf of the group, Anluan Dunne remarked: “the design detail of the greenway is critical to its success. It is really important that the experience of arriving into Fenit is a memorable one and our proposal seeks to enhance the draft design issued by the Council. For Fenit locals who use the beach and amenities nearby we also want to enable the community by providing space for festivals and events when that becomes possible once more. We have put a very positive, constructive, submission to the Council in this regard. The community are supportive, local groups are supportive and now we are seeking the support of our public representatives.”

The Kerry Cycling Campaign presented their proposal to the Fenit Townhall Group at their recent meeting, present also were several municipal district councillors. The design changes were well received. Following the presentation the group secured the backing of a large number of business, community and sporting organisations.

Keith Phelan from Kerry Cycling Campaign said: “apart from the Fenit trailhead we also suggested changes to exits along the greenway in particular Fenit Pump House, Kilfenora and Spa Village. Official access points and minor trailheads are essential to both allow visitors to access local amenities and allow locals to access the route for commuter purposes. Having the support of the groups in Fenit demonstrates how invested people are in the overall greenway project and they really want to see it completed to the highest possible standard”

Cycling is becoming increasingly recognised for the contribution it can make as a sustainable and healthy form of transport for work, education and leisure trips within and around towns and villages. The Tralee-Fenit Greenway will become the most important amenity in the Tralee area since the completion of the Aqua Dome.

The Kerry Cycling Campaign look forward to the timely completion of the project and hope to see it fully integrated with communities such as Tralee, Spa, Kilfenora and Fenit.

REFERENCES
The proposal can be downloaded below 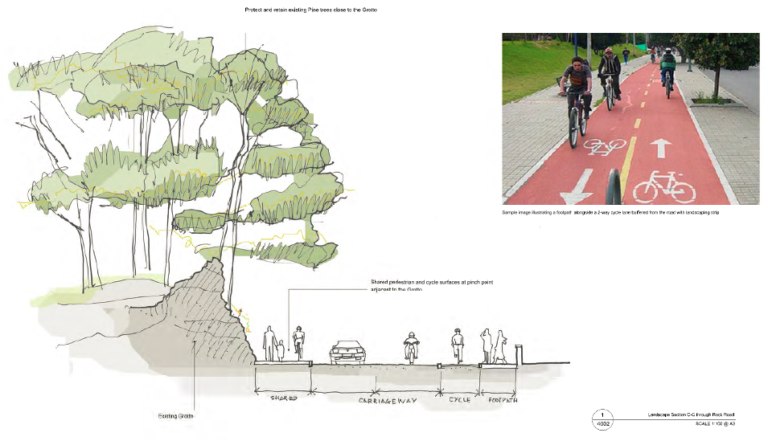 Kerry County Council’s Killarney Municipal District office has proposed an ambitious plan to install segregated cycle-ways on arterial routes into the town. We believe that these plans are the first significant step in enabling cycling for day-to-day journeys in Killarney.

As part of the public consultation process, we made a submission to the Council. The Part VIII process is important as it allows the public, community groups and advocacy groups to have input on the proposed design. The Part VIII documents are available from the Council website.

We focused our submission on three key areas of the proposed design:

The Kerry Cycling Campaign are very supportive of the proposed scheme to install significant segregated cycling infrastructure in Killarney. The ambitious scope is heartening to see and will help to enable people to choose to take their bicycle over their car for day-to-day journeys. We commend the engineering team for their vision in this regard.

Cycling is becoming increasingly recognised for the contribution it can make as a sustainable and healthy form of transport for work, education and leisure trips within and around towns and villages.

In the context of Kerry this project can serve as an exemplar to drive the installation of such infrastructure across all towns and villages in the county.

While we welcome the plan in general the Kerry Cycling Campaign have a number of constructive observations and recommendations we wish to make.

The full submission is available as a PDF to download below.