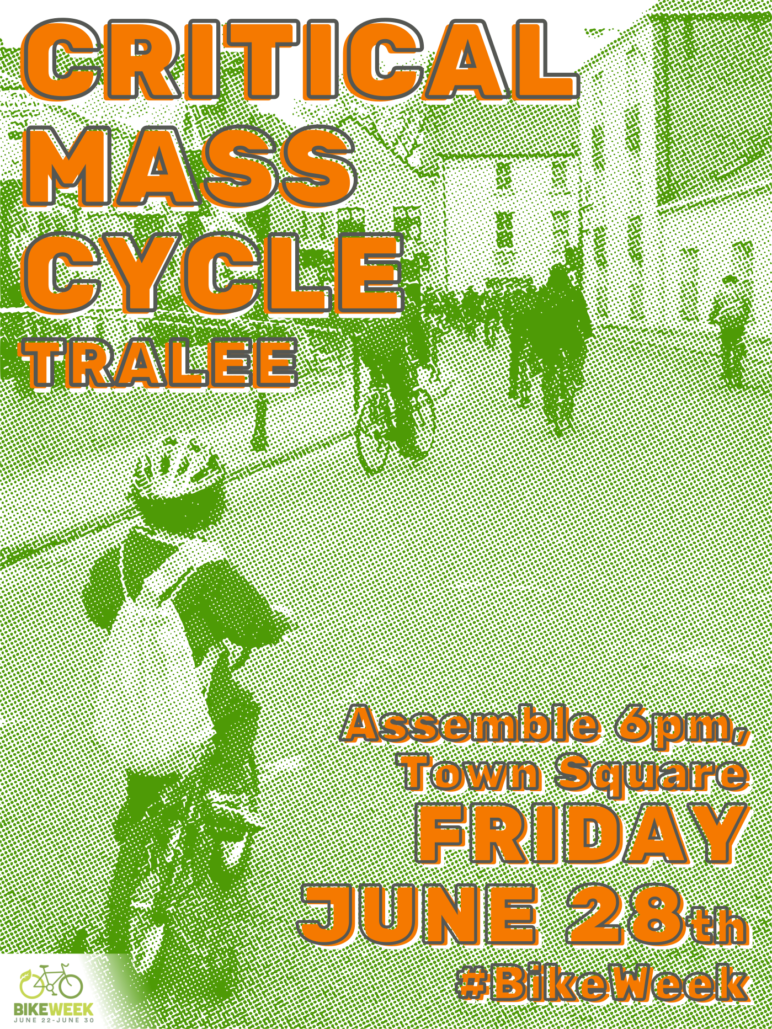 There was a nice xmas surprise for cyclists in Tralee as flexible traffic bollards were installed to protect the cycle lanes at the north end of Denny Street.

The cycle lanes which were installed almost 2 years ago as part of the Active Travel Town project have been of little use to cyclists due to illegal parking.

In response to this Kerry County council resorted to blocking the cycle lanes with barriers, which of course also rendered them useless to cyclists.

Part of the issue was the use of the cycle lanes as an adhoc taxi rank due to a dispute regarding the re-designation of taxi locations as part of the traffic realignment in the town centre .

Now to see how long they will last ! 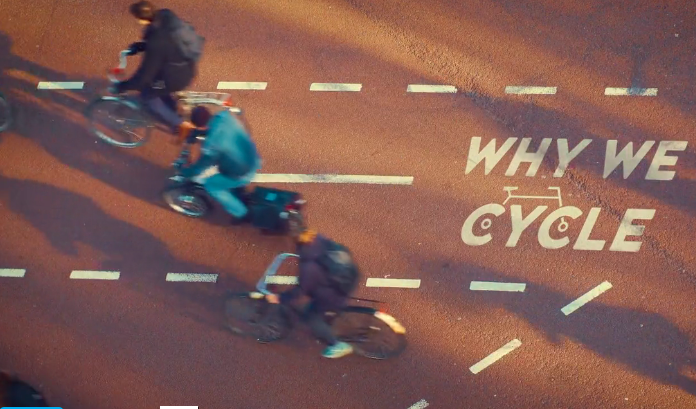 “Why We Cycle” takes a ride with ordinary cyclists and specialists from a variety of disciplines. These conversations uncover some obvious, but even more hidden effects of cycling, on people, on societies, and on the organization of cities.

This film is a free event (limited spaces) and will take place at Kerry County Library, Tralee, Thursday 12th of April at 6.15pm

This event is made possible with the support of Cyclist.ie and Kerry County Library.

Part 8 planning application for the development of  Blennerville to Denny Street Amenity Trail was approved at a Kerry County Council meeting on Monday, this is the first development  as part of Tralee Active Travel Town project.

The planning was for a amenity trail  consisting of a cycle and footpath from Blennerville to Denny Street, this will be the first section of a cycle route which will ultimately stretch from Blennerville to ITralee North Campus/ Kerry Technology park. This path will also join the existing Lee Valley path which runs from the Aquadome to Ballymullen with a proposed extension to Ballyseedy woods.

As well as the creation of a 6km cycle route between Blennerville and  ITralee North Campus the funding will also be used to create two-way cycle facilities along Denny Street,  implement ‘shared space’ zones in the Mall, introduce a 30km/h speed limit in the town center as well as the appointment of a cycling and walking coordinator to champion the smarter travel initiatives.

In April 2014 the Department of Transport, Tourism and Sport (DTT&S) granted €1.3million funding for Tralee as part of it’s Smarter Travel initiative with another €900,000 funding coming from the local authority itself to develop Tralee as an Active Travel Town. The Active Travel Towns Programme is designed to achieve modal shift from the car to either walking and/or cycling and to encourage greater public transport use through facilitating greater walking and cycling access to public transport. 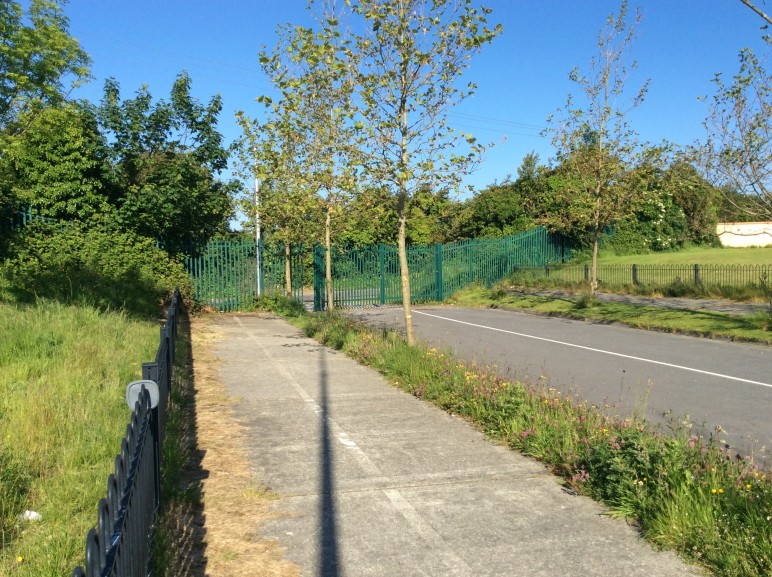 One of the main complaints of the first phase of the Tralee to Fenit Greenway was the lack of route permeation and linkage with estates it passes, with only one intermediate access point along the whole route, this issue was observed by numerous individuals and groups as part of the planning process.

A prime example of this was at Gort Na Greine where the existing access point was blocked up with industrial palisade fencing despite the fact that at the time of the development this was a well trodden route.

Within a short period of the fencing being installed a few sections were removed and people were able to ‘unofficially’ use the link again , it was a common sight to see people lifting bikes and even children in pushchairs through the gap in the fence.

The ultimate irony here was the fact that the Gort Na Greine road had an existing cyclepath, the white line can be seen runnign down the center of the footpath  in the picture above.

It was great to hear that this very issue was raised by Cllr. Pa Daly at the November Tralee Municipal District meeting, and that the fencing will be removed and access restored.

11. Cllr. P. Daly:
That this Council will construct an official gateway on to the Fenit Walkway from Gort Na Greine.
REPLY:
The existing palisade fence and gate will be removed and a new pedestrian access will be provided to facilitate connectivity between the local
estates and the Walkway
Cllr. P. Daly said that he welcomed this reply

Kerry County Council have finally removed the fencing to allow ‘official’ access onto the greenway from Gort Na Greine and adjoining estates, this is great for linkages along the greenway.

It is surprising that the full fencing was not removed only the part bounding the roadway meaning that pedestrians have to depart the footpath and travel along the roadway, a situation not ideal especially for the elderly, people with pushchairs, and wheelchair users. 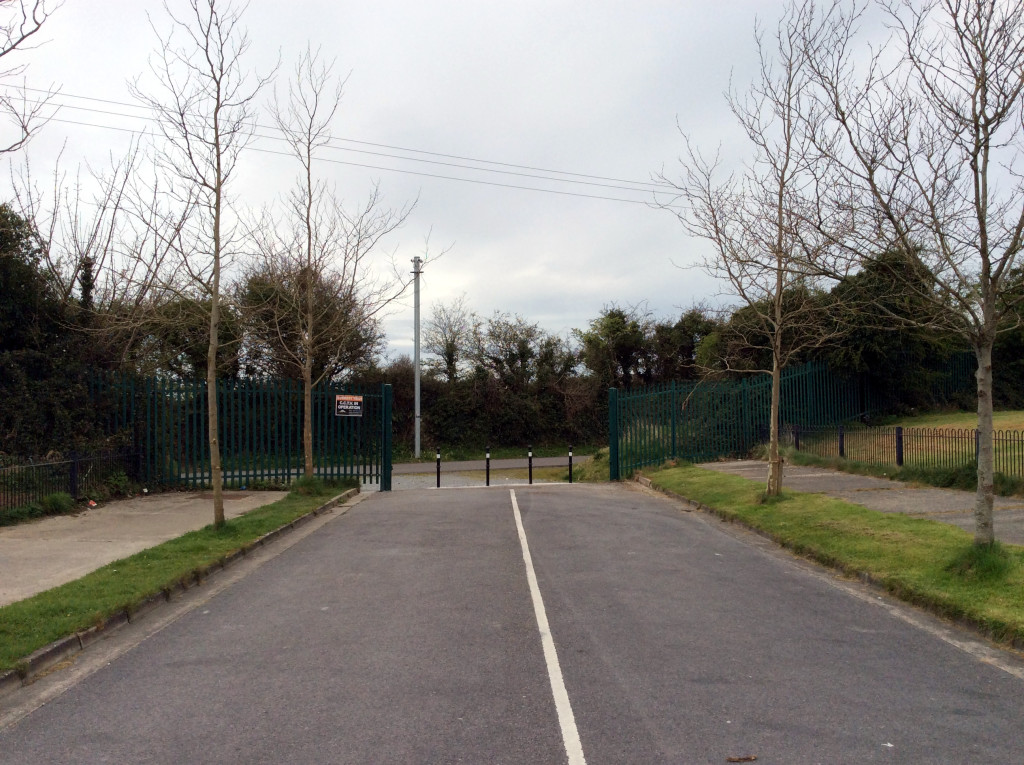 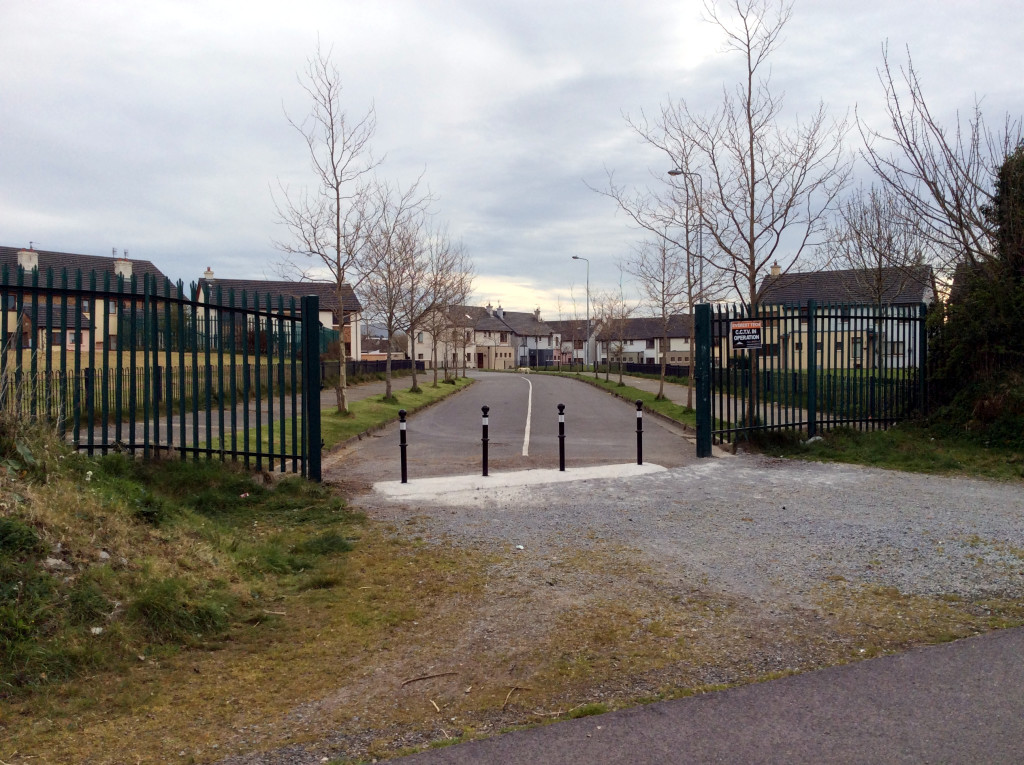 Last year Tralee’s bid to become an Active Travel Town was successful when the town received funding of €1.3million from the Department of Transport, Tourism and Sport (DTT&S) as part of it’s Smarter Travel initiative with another €900,000 funding coming from the local authority itself bringing the available funding for the project to €2.27 million.

The project is to be developed over 5 phases:

As part of this project Kerry Co Co have just launched a dedicated website, traleeactivetravel.ie and a promotional video.

The original funding application can been found here and great to see our nascent campaign get a mention in the bid !