With the recent fatalities on Kerry’s roads and calls for a Minimum passing distance law it is great to see local newspaper Kerry’s Eye has launched a massive safety campaign aimed at keeping cyclists safe on the county’s roads.

Kerry’s Eye started the campaign with coverage on page 1, 2 and 3 of this week paper and the campaign will run for the rest of the month of June.  As well as this Kerry County Council began erecting signs promoting the Stayin’ Alive at 1.5 campaign at strategic locations around the county, Kerry’s Eye will also be distributing  car stickers and posters

“The Stayin’ Alive at 1.5 campaign is a vital initiative that will hopefully save lives and make the county’s roads safer for everyone,” said Kerry’s Eye editor, Colin Lacey. “As a cyclist and driver myself, I see how vulnerable cyclists are and how dangerous our roads can be. But as drivers, if we change our behaviour just a little, and adopt the minimum 1.5 metre passing distance, it will help ensure that all road users can safely share the our road space.”

At last months meeting Kerry County Council passed a motion to formally support “Staying Alive at 1.5m’ Campaign, which promotes safe driving for Motorists overtaking cyclists. The motion was proposed by Cllr. J.J. Culloty and seconded by Cllr. J. Sheahan with Cllr. Culloty calling on the Council to request the Road Safety Authority and the Department of Transport to change road traffic legislation to require motorists to give a safe overtaking gap of 1.5m between the vehicle and a cyclist. 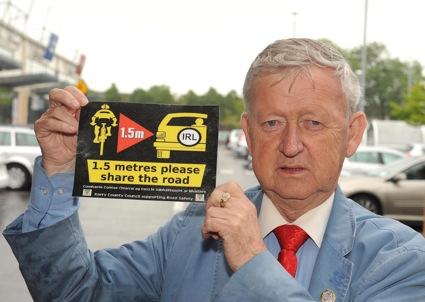 Cllr. D. Grady allocated €1,000 from his Councillors allocation to print sticker to promote the message can requested that the be used on all council trucks and lorries in Killarney Municipal District. 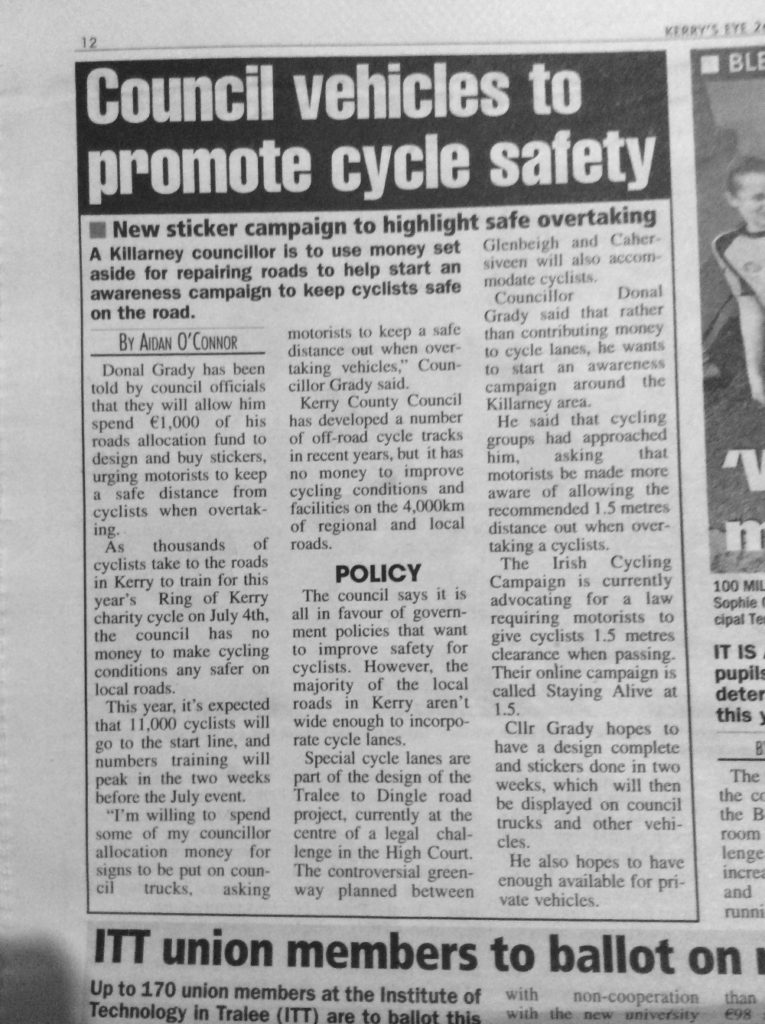 For more information see the Stayin’ alive at 1.5 website.