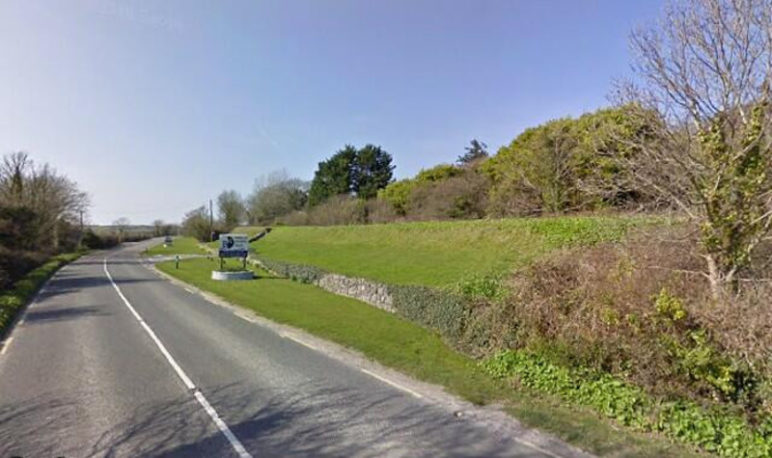 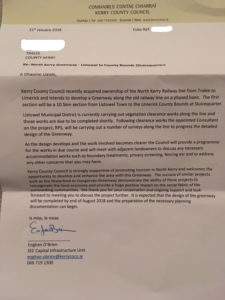 Following the transfer of the two North Kerry railways from CIE last year, Kerry County Council has this week begun the consultation process with interested parties along the proposed North Kerry Greenway.

Letters were delivered to residents and landowners adjoining the route which will run from the current Great Southern Trail head at the county bounds to Tralee where it will join with the Tralee to Fenit Greenway.

This is a long awaited development in a project which was originally initiated 30 years ago this year. In 1988 Sustrans was commissioned by Shannon Development to carry out a comprehensive feasibility study on the development of the Great Southern Trail.

The report outlined Ireland’s first planned greenway, over the intervening three decades the entirety of the  Limerick section of the route has been converted. While Kerry has fallen behind there has been action on both ends over the last number of years with the opening of the urban section in Tralee and the ongoing clearance of the 10.5km section between Listowel and the Kerry border. A survey of this section is currently being carried out, and it’s expected the design of the greenway will be completed by the end of August then preparation of the necessary planning documentation can begin.

Last year Limerick Council took over the running of the Limerick section of the route from the volunteer led GST Ltd. and plans to invest significantly in the amenity allocating €1.2 million in their 2018 budget to the project. They are currently in the process of re-branding the route as The Southern Greenway, along with the installation of new signage there are also plans to rejoin the Barnagh tunnel to the route which was previous cut off due to road realignment as well as resurfacing the trail. Longer term plans include extending the route right into the heart of Limerick City.

In Kerry the route would not only provide a much needed boost to tourism in the area but would also serve to provide a safe off road link connecting the North Kerry towns of Tralee, Ardfert, Abbeydorney, Lixnaw and Listowel, as well as linking isolated rural communities.

The Great Southern Greenway which if fully developed would be almost 100km in length making it Ireland’s longest greenway. The route will also form part of Trans-European  EuroVelo 1 and in time will link up with other greenways such as the Waterford and Mayo greenways in order to provide a dedicated cycle route from Wexford to Belfast along the Atlantic coast, much of the route would be in parallel with the Wild Atlantic Way.